Today I took the plunge into the next-generation KDE desktop, performing a dirty upgrade from Kubuntu 14.04 to 14.10 before installing the plasma-5-desktop package; and this is my first impression of KF5.x and Plasma 5. This is also a bit of a primer, because when Plasma 5.2 enters the stage I’m interested to see the comparison and do a second write-up, using my experience in both 5.1 and 4.x as points-of-reference. 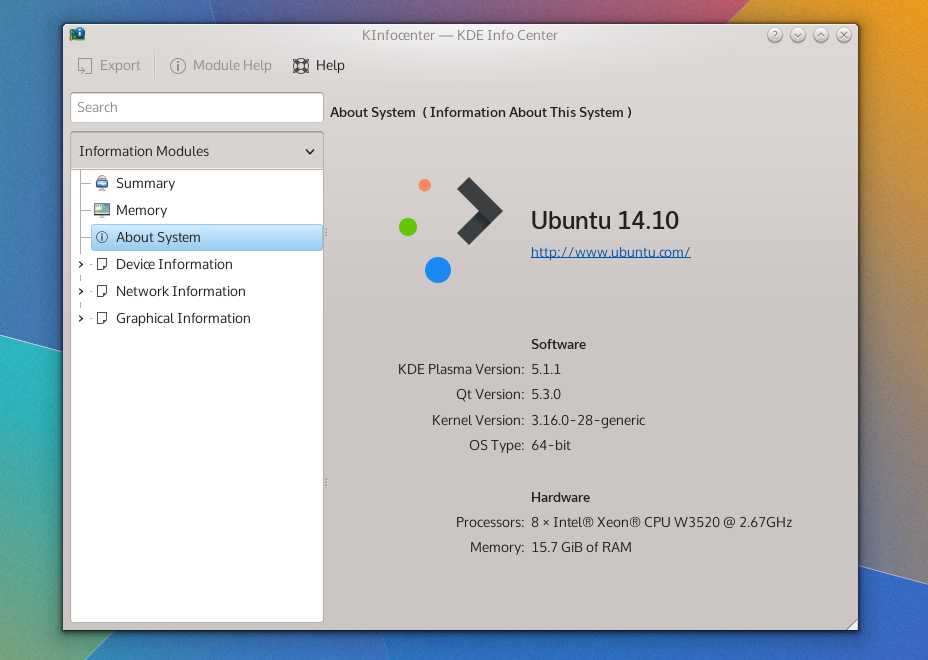 Many KDE applications are in a transitional state and not migrated to KF5, so summarising the applications’ of KF5 as “uneventful” is apt because there are literally no events. I don’t know how a great deal of this is being handled, and it could just be from my method of installation, but aside from the system settings panel almost all the core applications are still running KDE Frameworks 4. Uneventful can be good, and I’d rather apps take their time porting to KDE 5 than sloppily rushing their ports. So, upgrading to the next-generation won’t gut your applications, and that’s a good thing to know an upgraded desktop won’t be paired with potentially unstable apps.

This makes me note how differently this iteration of the frameworks has been handled in contrast to Frameworks 4; there’s no mad science going on here folks – this major transition is being handled with caution and care.

When it comes to the desktop itself, the reserved nature of the application updates speaks nothing of what you’ll get with the desktop widgets; a complete replacement of everything you’ve got. This sounds obvious, but at first blush while KDE looks similar to its forbearer with the white panel at the bottom, sporting the same widget selection and placement as its predecessor – that’s where the desktop similarities end, and it’s probably easier to name what’s stayed the same than everything that’s changed. This all makes sense, because swaths of the desktop *had* to be re-written, and the authors didn’t want a rocky transition this major release.The changes I did encounter aren’t flow-breaking and you won’t feel like a drunkard stumbling around unfamiliar territory, it’s still got KDE DNA and while you will have several “oh that’s different” moments: I’m glad to say they’re mostly good.The bad news first though; at least in Plasma 5.1 many of the widgets you may have used simply don’t exist yet. New and returning widgets are in the pipes, and with time they will surely return with the same level of polish found in the current crop of widgets, but with such a dramatic re-write it will take a few releases for all the widgets to catch up.

The good news is that the Plasma goodies which do make an appearance are universally improved. KDE has fully committed to QML as the language used for programming desktop components, and this decision has yielded a much more consistent desktop. It’s one of those things which is difficult to put your finger on, but it’s all just a little more cohesive. 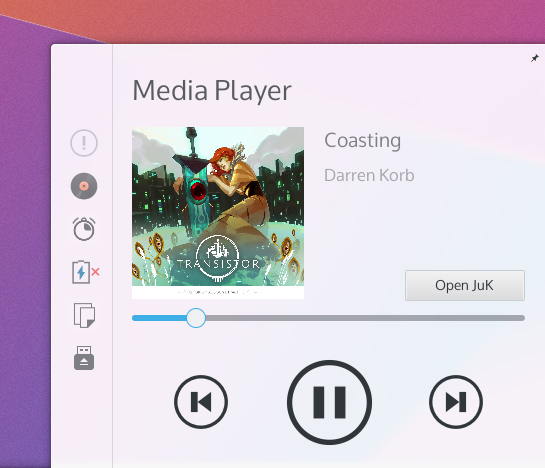 There are a few notable new widgets and behaviours I’d like to specifically mention. The new search widget is shockingly fast, organised, and a hidden treasure. The notifications tray has been reworked; it’s easier, simple, consistent, and often integrates controls more smartly than before. The applications menu launcher, despite having no outright usability differences, also “feels” better.

I’ll say this outright; KF5 and Plasma 5 are not nearly as mature as yesteryears KF4-based desktop. After installing the update and doing a complete reboot I’ve suffered several crashes, and Plasma had at one point managed to forget my colour and wallpaper settings. A second restart seems to have shored it up, and the desktop now seems to be stable; perhaps it had to overcome stage-fright? I’ve had several issues with the Plasma desktop, ranging from the desktop placing the ‘add widgets’ tray into the middle of the screen (seemingly “docked” onto a window), and the system settings application behaving like a petulant child.

With all that aside, for en early revision of a recently overhauled desktop environment, (after it calmed down) it’s become more stable, and it’s been running a full day without issue. With that being said, I’ll be looking at 5.2 before I take a more firm stance on stability and making recommendations based on that factor.

I have one of those huge Aluminium Mac Pros which I’ve upgraded it significantly during its’ lifetime, yet despite my heavyweight computing power and KDE never feeling ‘slow’, I must admit often times it didn’t necessarily feel ‘fast’ or ‘smooth’. With KF5 and Plasma 5 the desktop for the first time feels *smooth*, please understand I’m saying it feels buttery, slick, and silky in all the right ways.

This can be attributed to Qt 5, which has moved to a hardware-accelerated graphics-stack, and while KDE has taken advantage of hardware acceleration since KF4, it was not nearly as pervasive throughout the entire toolkit as it is in this most modern environment.

There also seems to be fewer visual glitches associated with the desktop; KF4 had some minor issues where it might blur a background or draw a shadow before whatever content was to be placed on the screen. KF5 and Plasma 5 have reduced these issues, but odd moments of ‘hiccups’ which reminded me of KDE 4 can be rung from the system if you launch an unloaded plasmoid from the panel. These visual hiccups are incredibly minor, but do detract from the incredible mirror-shine polish that I feel will become expected of the modern Plasma desktop. 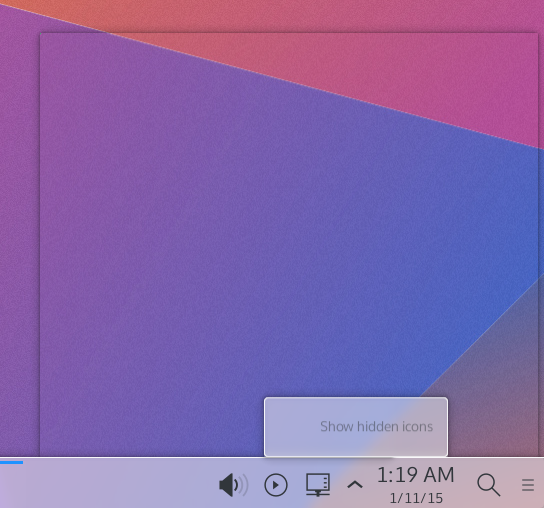 This can be seen a split-second before the content catches up and fills in the popup.

Animations throughout the Plasma desktop are both more pervasive, consistent, and smooth. Everything feels animated, and it makes the desktop feel more alive. The animations and movements within widgets themselves look consistent, and are overall much more tied together. It feels less like desperate parts bolted onto a desktop, and more like a single whole dancing to the same tune.

Once again, a disclaimer; I’m a member of the group managing this aspect of KDE.

Out of the gate, Plasma 5 is both more and less visually polished than the Plasma 1 experience, it’s give-and-take. Generally, the “new look” (named “Breeze”) for KDE aims to be simpler, less cluttered, and more ‘designed’. The layout of just about everything has improved dramatically; this is in blatant disregard to your selected theme, being a core improvment on an applications’ and widgets’ level. Things don’t feel so tightly packed together, and it allows your eyes to rest more easily.

(as a side note, in my screenshots I’m using Oxygen again)

The new applications’ theme (as it stands in 5.1) can feel Spartan, with reduced chrome in the windows, more focus on spacing, and whiter default pallet. These are still clearly the early days for Breeze, and quite simply it hasn’t had the 6 years Oxygen has had to fine-tune its design and mature. That being said, it’s a very different style in it’s most core concept: Oxygen had head-first jumped into an extremely heavy and visually intense theme which gradually lightened itself up, while Breeze has started with an extremely minimal design.

The majority of toolbar icons no longer have colour, instead using a monochrome design, and it can sometimes take an extra few moments of searching to locate icons you’re looking for on the toolbar. This is offset by vivid content icons which readily call to your eyes, sporting near-pastel colours and thoughtfully laid out structures. Overall, the icons shift focus away from the UI and towards content, and you really don’t feel like the chrome of the windows is there.

The end result of all these changes is a much lighter feeling KDE. The UI gets out of your way more, and instead of attempting to woo you with distractions it’s clear the next generation desktop will have a reserved respectability in terms of costly design choices that will create a more elegant environment.

Plasma 5.1 is configured to feel a great deal like the traditional KDE desktop, with the standard panel, mouse actions, and shortcuts, but things diverge a great deal in the system settings application which has been completely rearranged. Previously the grouping of the settings menus felt random as they were built on the leylines of technical details over user-oriented goals, while in Plasma 5.2 they are more sane to users, being grouped more by goal than underlying mechanics.

Desktop configuration (specifically managing widgets) has been incremented upon, with some changes feeling slightly arbitrary. The “add widgets” panel now slides in from the left and adding widgets now presents a “drop indicator” which illustrates where on an underlying grid your widget will be placed to help avid widget-users keep everything aligned. Widgets still have the slide-out drawer, which can often seem strange in how you interact with it – but it’s unchanged.

Several widgets on KDE which beg for configuration options open up bare settings dialogues, such as the search widget. While this is a minor nit-pick, it’s the type of issue where you know the first step is still going to be building the selection of widgets available, and you’ll need to wait to play under the hood of the high-quality widgets bundled with KDE.

KDE Frameworks 5 and Plasma 5.1 create a fine environment, but one that is still visibly in it’s early days – you could almost say it suffers from many small papercuts, avoiding the haemorrhaging issues that soured the initial KDE Frameworks 4 release. With a completely re-based desktop I don’t feel these little cracks will remain for long, as it seems the developers have a firm grasp of what needs to be done and exactly what they want to do. For a major point-release, there’s a real feeling that this software will reach rock-solid stability very quickly given the state of it as it stands.

Now, do I recommend Plasma 5.1 for general use? Compared to the current 4.x Plasma release?

If you were installing fresh I’d say go for Plasma 5, but if you were just considering an upgrade, I’d wait. Plasma 5.2 is coming in hot, and I believe it will be the beginning of this next-generation desktops’ serious push to bring people to this fine new desktop. Even if it doesn’t reach feature-parity with the previous desktop, I imagine 5.2 will be the ice-breaker for the interested public with 5.3 will more/less beginning the larger migration to the 5 series desktop.